My solo show in the project space at SUMA  in Cedar City, Utah— which is 170 miles east of the Nevada Test Site and home to many Downwinders with living memory of atmospheric atomic testing.  This area is also where my mother and her side of the family originate in Utah. The show represented months of research and builds on other issues and interests in my work about  the global perception of the American frontier and the hidden histories it eclipses.  In this case, I've taken a somewhat journalistic approach in addition to an aesthetic parsing of cultural depiction. This exhibition is dedicated to those downstream and downwind in an effort to peel back the foreground so that we might see the background more clearly.

Iodine-131, cast gypsum concrete, acrylic and reflective paint, LED lights, 47"x47", 2020.
This is a topography of the Nevada Test Site, created from translating real earth via Google satellite imagery through different software and technologies to arrive at geo-accurate low-relief sculpture. Civilians are not allowed to enter this site, but the scars from testing are visible from space. 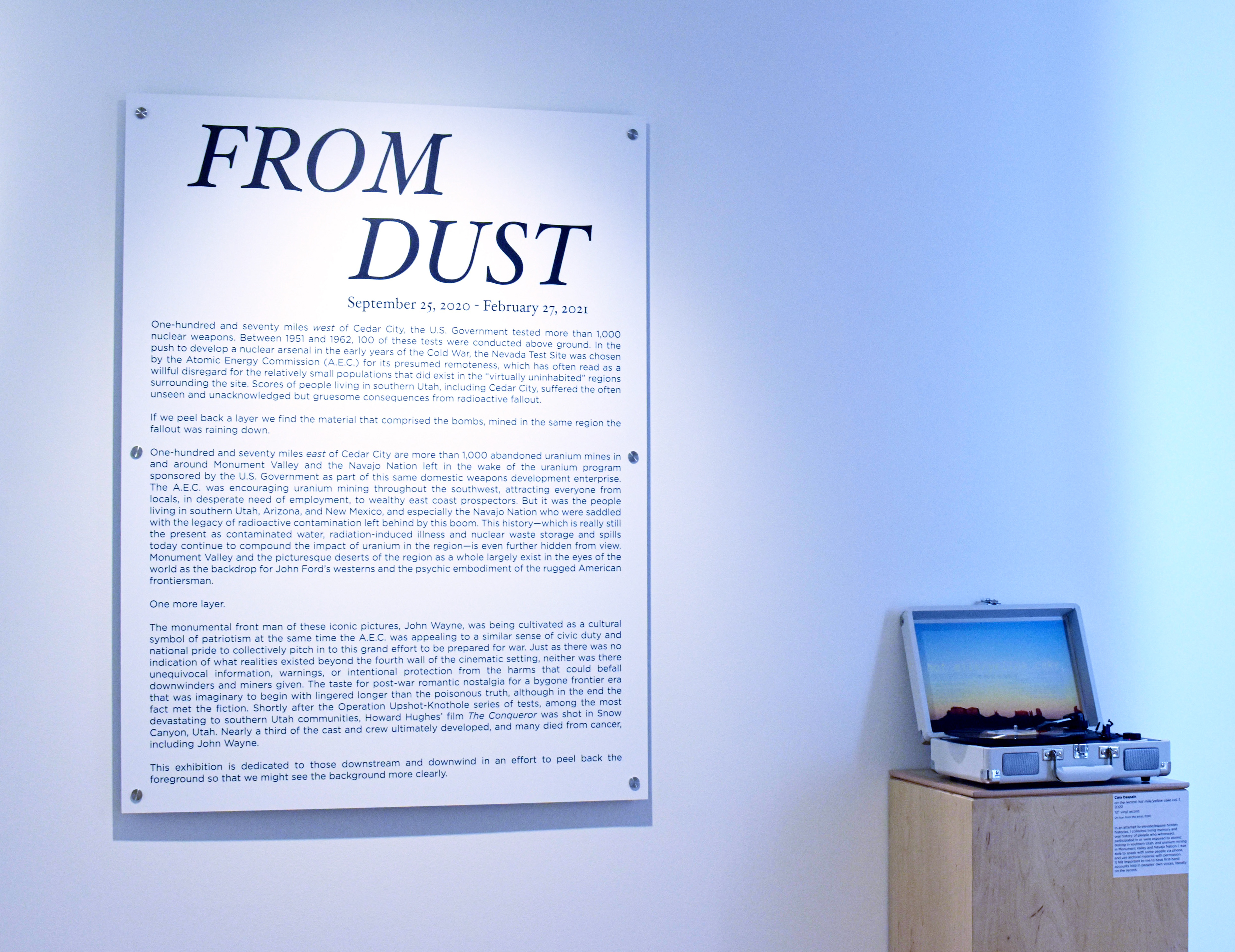 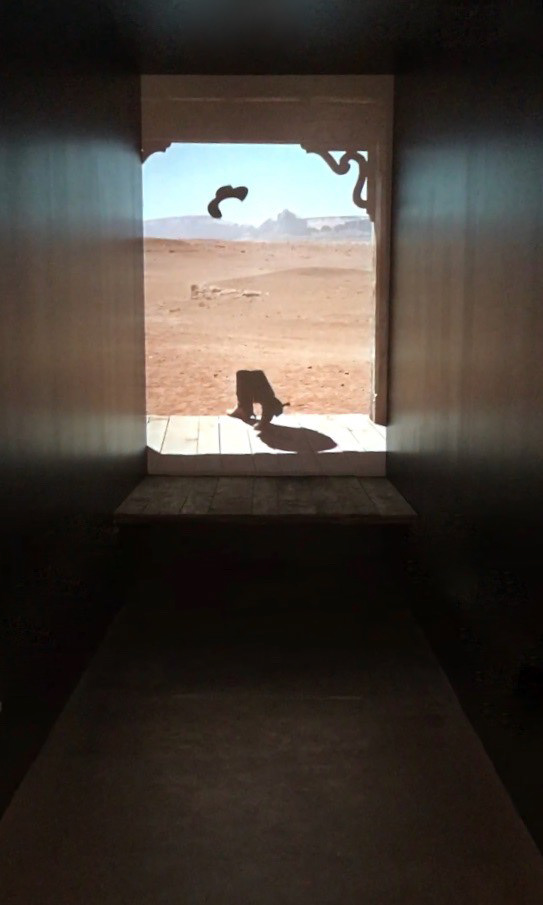 installation view of Fractured Landscapes at the Hollywood Arts and Culture Center, 2021

For this exhibition I was thinking a lot about claim staking—from the literal claiming of minerals buried in the earth to the acquisition of land on its surface, and beyond. Both of these leave visible scars, testaments to having irrevocably crossed a threshold. The development of nuclear arms during the Cold War, and the race to get to the moon—which was both a cover for the former and public-facing space theater—provides a historical context and a very clear and present cautionary reminder. Since the first atomic weapon was detonated at the Trinity test site in New Mexico, USA on July 16, 1945 we have been on an existential precipice of our own creation.
There is also a less tangible, largely invisible force related to all this which has to do with the psychic imprint and cultural memory left in the wake of weapons development and testing, along with the collateral human toll and environmental pollution. This era is conveyed with patriotic and pop images—from Western and sci-fi cinema to things like Uranium boom-town advertisements and Las Vegas atomic cocktail parties. Although the real spectacle of mushroom clouds and rocket launches are easily remembered, the real effects of developing this otherworldly technology are not—even though the particles fused, split and forged in the process can be detected in virtually every person and living thing on Earth. Uranium mines that continue to leach radioactive contaminants, test sites with dark histories and nuclear waste storage facilities the world don’t seem to reach our psyche and visual language as readily. The first image of the Earth from space, snapped on 35mm from a V-2 missile launched from New Mexico, and especially its successor “The Blue Marble” taken by the Apollo 17 crew on their way to the moon years later changed us forever. Perhaps ironically it gave us pause, sparked the environmental movement and a sense of unity as one world. Satellite technology—also born of the Space Race—has now allowed companies like Google to image every inch of the Earth’s surface, including restricted military sites. Who owns the images of our history? Civilians are not allowed to own moon rock, but countries vie for control of the space between it and the Earth. And tech billionaires have designs on owning swaths of other planets. I am trying to re-configure, unearth and excavate the imaging of this history so we might see more clearly what belies the imaginary, using the very resources born of it.

as above, so below, cast plaster, acrylic paint, reflective spray wood. 2021.
The sixteen monoliths contain United States and Soviet nuclear weapon test sites and uranium mines from around the world, and the Apollo landing site and Oppenheimer crater on the Moon created from translating Google satellite imagery through different technologies to arrive at geo-accurate low-relief sculpture. In many cases, scars from detonations are visible, in others--such as the site where the largest nuclear detonation in history occurred, the Tsar Bomba-- the devastation is not physically visible.

on the record: hot milk/yellow cake vol. 1, 10" vinyl record, 2020
In an effort to elevate/expose hidden histories, I collected living memory and oral history of people who witnessed, participated in or were exposed to atomic testing in southern Utah, and uranium mining in Monument Valley and Navajo Nation. I was able to speak with some people via phone, and also use archival material with permission.
hear some clips here

forge, cast concrete and pyrite ore, 2015. 14 objects I found along the railroad tracks near my studio in Miami: broken wood from railroad ties, railroad spikes, crushed granite ground cover for the track, an animal bone, a palm frond chunk, a cinderblock chunk repeated and distorted.

99 claims (installation view), cast concrete and pyrite ore, 2014. This is a portrait of the founder of the Mormon Church, Joseph Smith, cast 99 times from the same original sculpture, such that each unique variant is a distortion of his visage. 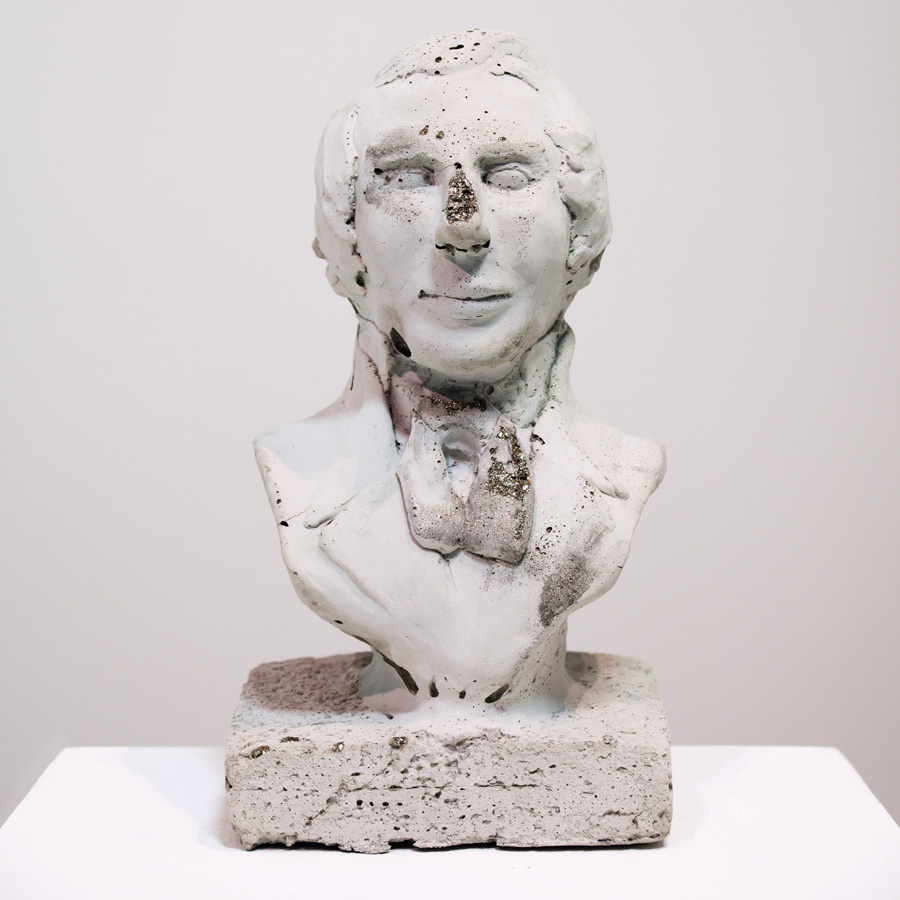 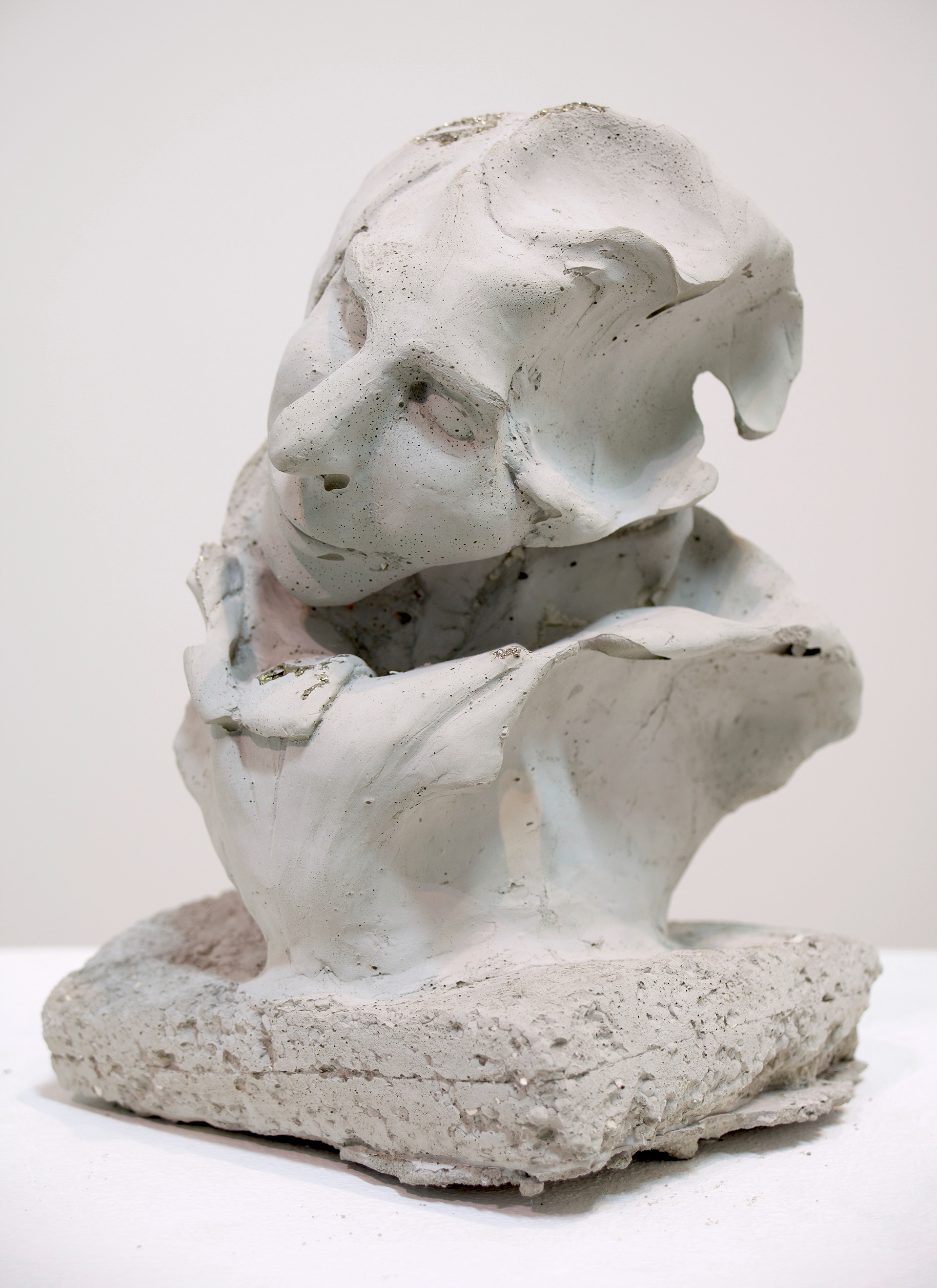 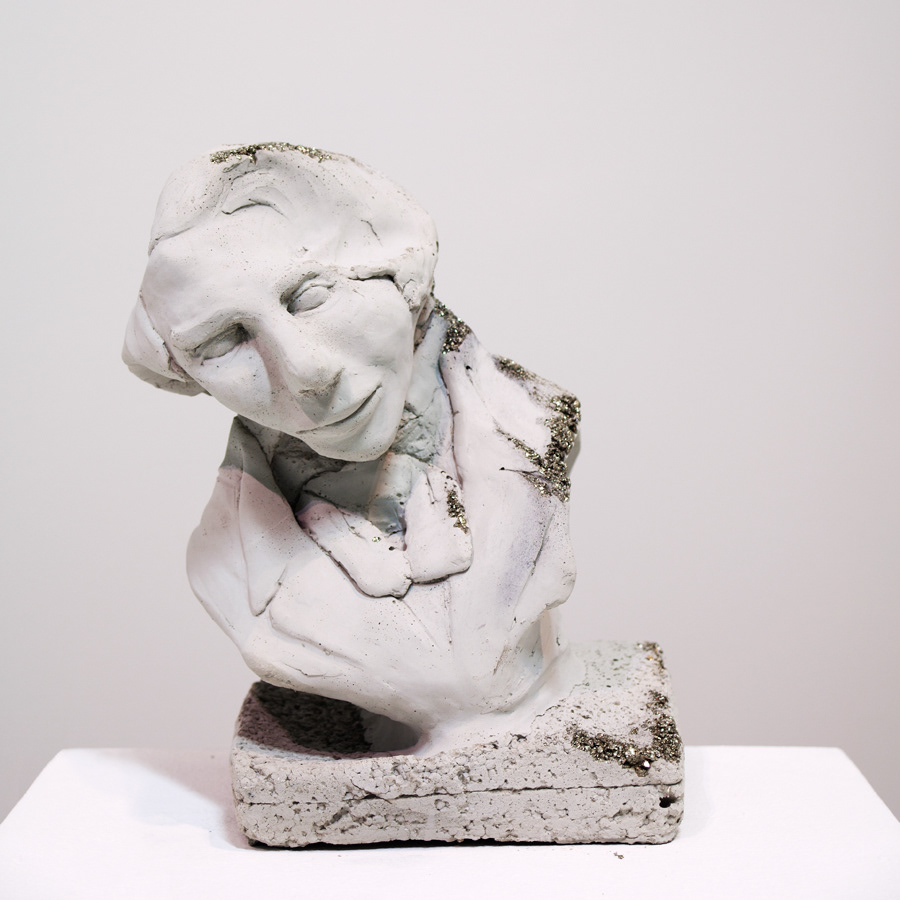 pyrite paintings, pyrite residue and punctures from smashing pyrite ore chunks on dropcloth to create aggregate for 99 claims and forge. 2014-2015.

and all that comes with it, concrete and pyrite ore cast from lost wax, 2013